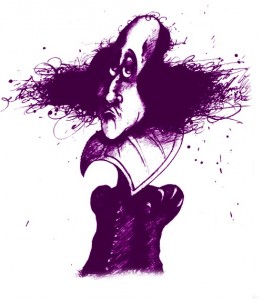 You gotta love the bard…when you can make heads or tails of what he’s saying.

I technically had three auditions today but the first was for a Shakespeare training intensive and I don’t think that counts as part of the 100 in 100. But what WAS enlightening about it was the variety of actors of color who were called in and the fact that I miss Shakespeare and am rusty as a 9th century crucifixion nail in doing that kind of work.

The two auditions that concern 100 in 100 where a random choice made last night.

I seem to have good luck just waltzing into rooms and getting appointments for within 20 minutes of my arriving. I question what is going on but not enough to care because it means less time spent in those oppressive rooms wafting with paranoid energy and vocal warm-up posturing.

Some days it’s like Mutual of Musical Theatre Omaha…

However, I did almost have an embarrassing moment at audition one because I had decided on singing until I read the notice carefully and realized there was only one musical in the season…for a one-woman show…who is black…

And although 100 in 100 is about going in for everything, I think this one would have been shooting myself in the foot.

Although I did tell the folks behind the desk I almost sang for the role, which went over surprisingly well.

I had to do a monologue though, and as you know from reading previous posts, I have none (yet) because I never needed them and I’m lazy.

But the great thing about being a playwright is having monologues already written for characters that I essentially could play. Is it tacky to do my own material? Probably. Is it a smart time-saver? Damn skippy.

And really – how many people are gonna do a monologue about being mistaken for a terrorist?

It was short and simple and I got some chortle so how am I gonna complain. Plus I decided to be cheeky and go in pretending I was a Brit. I dunno – it seemed right. I felt frisky. I thought – why not?

However, I did NOT avoid an embarrassing moment at the second audition.

Maybe it was getting there just in time to be put on deck. Maybe it was because I was up at 6am. Maybe I was already burning out because I had not eaten all day. Maybe I’m making excuses.

I sang a song for a show I love. A song I have done many-a-times. One I know in my sleep. Or so I thought…

The piano launches (at a tempo much faster than previously agreed upon – bastard). I sing. I change pronouns on the fly to match the character in the show I would like to play. I get to the chorus. I sing. I realize I have no idea what in the HELL I am saying.

And I end up repeating the same three phrases. But with no time to think and adjust I just give each line a different reading. And of course I wonder if they noticed because they look so unamused behind that table. And how could they not? I mean…no one is THAT thick.

And all I can do is laugh really. I mean, realistically, the show is gonna go for names for the lead roles, so I am not that gutted because I didn’t stand much of a chance even if I channeled Freddy Mercury and went nuts in the room. But it’s a damned good lesson. I managed to get two Shakespeare monologues under my belt in 5 days, do them flawlessly, pull a monologue out of my butt last minute, but FUBARed something I’ve done so many times.

And thus is the magic of being in this business.

The kind of magic that makes you want to murder the man behind the curtain.

Today was a fairly good day for spotting actors of color, though. Given the shows, I expected it though, but they were only African American actors. I wanted more variety. I wanted others.