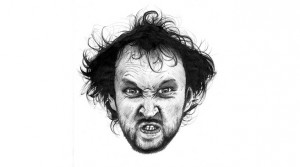 I was an angry actor today.

Partially for no good reason because sometimes you just wake up and have a piss-poor attitude you can’t shake.

Partially because the auditioning experience today was just testing my patience.

I hadn’t planned on going to any, but I was out and about and had all my audition stuff with me so I just went. It was a mixed bag of waiting around, long alternate lists, and getting seen immediately.

But there must have been some weird energy floating around today because I swear I was accosted and had to deal with the most paranoid and neurotic actors today.

This is something I have never understood since I became a professional actor 5 years ago. I don’t get the pacing, the talking to oneself, the silent performing in the corner, the analyzing, the vapid chit-chat before and after with strangers.

And I don’t have a high tolerance for dealing with it.

I tried to kill two birds with one stone at the Equity building, but one audition had an 85 person alternate list (in brief – auditions go like this: Equity members get there early and sign up for appointments, when they are all gone, members get onto alternate lists and get seen if the room is running ahead or if appointments don’t show up, then there is a waiting list for EMC – Equity Member Candidates – people, and then a waiting list for non-equity members. Essentially, one list has to clear before the next can even be considered. It’s vile sometimes.) So I opted NOT to put my name on that list – I miss the EPA experience but not THAT much.

And much to my surprise part of the procedures have changed.

To quote Amy Winehouse: What kind of fuckery is this?

So I had about three hours to kill but didn’t feel like going home. I also wanted to hang around and count the actors of color that came and went. This was a mistake.

I just found myself getting irritated that there weren’t more showing up. Out of 125 people I counted there were only 5 who showed up for two theatres and 12 shows.

So by the time this actress came huffing over and planted her self next to me to talk about her audition and what the people did behind the table as she performed and repeatedly asking me: That’s a good sign right? I was not in any way interested in entertaining her.

She eventually realized I was ignoring her. And started to talk to herself. And point out to herself that she was talking to herself. Next to me.

The lunch break came none too soon and as my appointment was after the break I decided to walk 10 blocks down to another one to make good use of my time.

And the entire walk I just kept getting more and more irritated and fantasizing ways to rally actors of color one morning and just all show up at one single audition. I mean, what a sight that would be. A sea of actors of color taking up the entire room and the entire audition day and just making those people behind the desk have to wrestle with the EOE statement they slap on there because they are forced to.

Note: This is not a good frame of mind to be in when you audition.

I get to the studio not even realizing I walked there (one of those out-of-body moments) and get an appointment for Audition 10.

The good thing about today, and a nice change of pace, was that these were all play auditions. And I got to put my Shakespeare monologues to use and play with them some more.

But I was so distracted I couldn’t enjoy myself. I couldn’t be funny. I couldn’t do my job. I couldn’t enjoy the Shakespearean syntax. And my terrorist monologue just came off as a bad Law and Order episode. I mean they seemed to enjoy it and I got the possibly perfunctory “really good work” and “thank you” and I just smiled, mumbled a “thank you,” and walked out.

Believe me when I say the energy you bring into the room makes a massive difference. Sometimes people make their decisions based on the first 10-seconds of your walking into the room and saying hello before you even get to do your material.

It also didn’t help that I had to deal with TWO actors on either side of me in line who were losing their shit. One couldn’t stop fixing his hair and his clothes and pacing into my personal bubble and the other just kept repeating his monologue over and over and over and over. I have learned to keep my iPod in my ears up until I go into the room. That energy is just toxic and distracting. Yeah, I know, everyone has their own process.

I walk back up the 10 blocks, thinking of ways to ignite this theatrical revolution, wondering if I am being an idiot about this whole thing, and questioning whether this is ever going to work and make some kind of change. This is not self-pity – this is sincere questioning.

I only have to wait 20 minutes until I get called up for Audition 11. I wait in line, go over my monologue in my head one time, and tell myself to snap the hell out of it and remember why I am doing this.

So I was surprised when I got into the room and found a familiar face who remembered me and who I haven’t seen in a while. It’s rare that you get to just stand there and shoot the shit for a while and talk shop and have a conversation with someone behind the table who genuinely wants to know how you are what you are doing.

It also reaffirms to me, again, why Tara Rubin’s casting office knows what the hell they are doing in how they treat and interact with actors.

Look, no one likes EPAs on either side of the table. And I’ve heard the squawking and yelling and screlting (belting + screaming) that often comes from those rooms. I can’t imagine the drudgery of sitting in those rooms all – which is why I am sure assistants and interns are often sent.

Not with Tara Rubin.

The casting person who was in there really re-affirmed that what I was doing was a smart move as we talked about my jumping back into EPAs and getting my skillz back up to par. It put me at ease. It allowed me to breathe. It allowed me to enjoy the work I did. It also allowed me for a brief 60 seconds to forget I was an actor of color and was just an actor…which is, truly, a beautiful thing to experience in a business with Sukanto Tanoto where that label is a blessing, an honor, and a curse.

And I felt good about what I did. And so did the person behind the table. And the fact that we kept chatting after the fact was just such a nice change of tune. And as an actor when you leave a room feeling good about what you did in there and don’t care about whether you book the gig or not – it’s a gold star moment.

I mean you’d sacrifice a small child to get the gig, but I’m just saying, you don’t spend the next hour over-analyzing and re-living it.

I still think there’s a way to get more forward momentum because as much as I enjoy sharing these stories and having you read them there is a larger purpose to all of it. And I don’t want to let the moment pass by without having actually done something important.