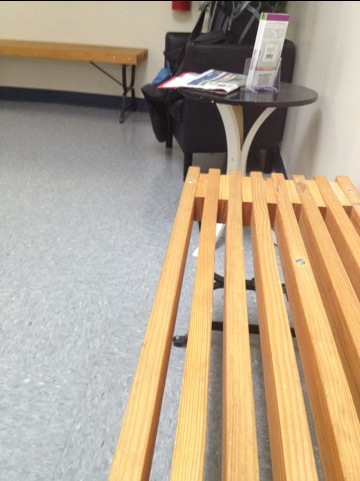 Yes…it has been a month since my last post.

I got busy then had to go out of town for a week then got back and couldn’t have given a shit about auditioning.

But I woke up today and dusted myself off and told myself to get over myself. I doubt I’ll hit the 100 auditions within the 100 days but anything is possible.

I actually haven’t had my 14th audition yet. I’m sitting in the hallway outside of the holding room (because actor chatter drives me nuts) waiting for my name to be called. I got a late start and my audition karma must have run out because I’m on the Alternate A list (see previous posts for explanation of list processes).

I had a moment of just giving up on this thing but realized that people are actually reading it and if I give up then I’m just letting the powers-that-be win and affirm the worthlessness I feel as an actor of color trying to make people uphold the EOE statement.

I went home to Florida last month for a wedding and to see friends and family. I always make it a point to stop by the theatres I essentially grew up performing in and catch up with the people in the middle of rehearsals.

One theatre was doing The Pajama Game, and wanting to stay abreast of the local gossip I asked who the leads were. To my surprise Babe is being played by a Filipina and Sid by a Latino. I say “surprised” not because they are ethnic but because there in little ol’ Florida a theatre was practicing color blind casting and no one was batting an eye.

Listen when I was there I was the only actor of color in shows playing lead roles no Brownie has any business playing (if we go by NYC rules). Being an actor in NYC has made me appreciate so much more the chances I was given. I mean it DID slightly ruin my perceptions of my castability, but if the leads in a traditional American musical
can be ethnic there why doesn’t that happen here?

The assumption has been that regional audiences like their shows whitewashed – I mean they’re not as metropolitan as NYC so they are not quite ready for mixed casts. Right… And certainly you would believe that with the recent casting debacles of the all-white Hairspray, the non-Asian led Miss Saigon, and the white-for-Nuyorican Motherfucker with a hat. But it seems that colorblind casting is healthier outside of NYC.

So what the hell is the problem here?

And hence why I am back here after wallowing in my own self-pity. Someone has to fight. Even if it’s one person who isn’t much of anybody. Because if someone asks me if I did my part and tried to fight and I say “no” then I WILL have failed.

So…I’m waiting. On this bench. Waiting to be called. Trying to change even on person’s mind.