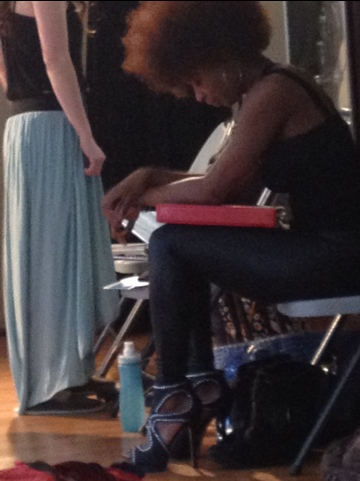 I decided to use this sniper shot I took today as my blog photo because it so accurately reflects that moment in an audition room that is a mix of contemplation, exhaustion, patience, frustration, and hope.

Audition 14 from yesterday did happen after much waiting around. At least it kept me out of the apartment and away from boredom. I spent last couple of days with my fishing kayak.

Although it was highly indicative of a problem in this business – The Grudge. Oh, the grudges that can be held in this business. And the amount of time. And for the dumbest reasons.

Five years ago when I first came to this city I was lucky to book an off-Broadway show in which I was one of the leads. The show kept getting extended. As we were about to close I got my then first agent who got me an audition for Oklahoma (the first and last I went to and agreed to once I realized what a ridiculously racist role it is – I’m sure I don’t have to say which role it was). I booked it. Then my show extended for two more weeks. I tried to negotiate showing up later in the rehearsal process but that was a no-go, so I turned it down. Why would I leave a lead role in an off-Bway show to do a small role in a regional theatre when I had only two weeks left?

Besides I had done every single performance and I wasn’t about to let someone else do the role to see it out.

My agent told me I was making a mistake and the CD would not soon forget it as he had a penchant for being a grudgey brat.

That OK production ended up being cancelled.

I ended my run.

I dropped that agent.

I forgot about the CD.

He clearly had not forgotten and although he was not going to say anything snarky he certainly behaved like I needed to really impress him.

Five years ago I woulda freaked.

Today – I flash a toothy hello, don a shit eating grin, and dare him to find fault in blowing his ass out of the water with a ridiculous rendition of a Disney song I do that is one-thirds Luther Vandross and two-thirds Billy Porter.

He started with his arms crossed, legs outstretched, and feet shaking. Halfway through the shaking stopped. By the end he was leaning forward.

There is NO rhyme or reason in this biz, so it’s best to just do your work, kick ass at it, and realize that 99% of things are outta your control so why stress.

On to Audition 15 today. I booked it over there after teaching to find a half empty room, so getting an appointment was easy. And I got to run into someone whose face and personality I quite enjoy.

But that room was the classic example
of a stereotypical audition room (forget that nonsense on Smash).

I’m talking vocal warm ups, intimidation runs, name dropping, what did you do questions, what are you doing next interrogations, bad outfits, and over eagerness so thick you could spread it on toast.

I wish I could report something nutty about the audition, but it was standard. Except for the fact that unlike almost everyone else who went in before me I didn’t feel the need to screlt my face off (scream + belt. A dangerously overdone thing in audition rooms of late). I mean I sing my stupid high notes, but I know my limits. Most others don’t.

If you don’t think you can hit the note – you can’t.

If you think it might sound bad – it does.

I like to rely on shocking people behind the table with the fact that a) I’m THIS ethnic and can sing (virtually unheard of in my community), b) I sing high even though I have dark features (which apparently always means you’re a baritone. See? A no sense biz), and c) I bring something new to the table they are not sure what to do with.

Figure it out coz it ain’t my job.

My heart WAS happy to see so many actors of color today (NONE yesterday and I was there for 5 hours and there were two other auditions going on). Though I suspect it’s because the role asked for a specific race. That’s the only time actors of color will come out in droves.

What about the other times? Come on! Make people take notice! Be the change you wanna see in the world.

A couple of friends have said they wanna join the bandwagon and I say “YES!” Do it!

Otherwise we just keep getting ignored until we disappear.