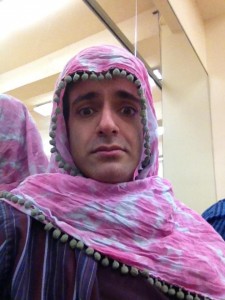 I said in my first post I wouldn’t mention casting agents/agencies but today’s 100/100 agent deserves a shout out. Tara Rubin and Merri Sugarman should be lauded as one of the only, if not the only, major casting directors that consistently bring in actors of color for shows/roles that are color free or unspecific. And I admire them greatly for this.

They also happen to be amazing/fun ladies so come on…

Since I have been in NYC they have called me in for lead roles in Evita, Shrek, Shakespeare and…Jersey Boys.

I know, I know. But one should never question the casting agents or muses. They truly are open to diverse casting. The EOE statement is not lip service to them. And to the best of my knowledge they were the only casting agency at AAPAC’s recent forum. They get mad respect for that if for nothing else.

We’ll just assume the others were busy.

So when I found out Merri was going to be in the room I was ecstatic. I was doing different material than she has seen from me for a show that I probably have no business being in (How to Succeed…). But, again, that’s not the point of this project. I had nothing to prove to her other than doing my job as an actor because she makes it easy for me to be an actor sans adjectival descriptors.

What did annoy me is that there was only one other person of color there. An African-American female. Where are my other Brownies? Ideologies don’t change unless they are challenged.

Actually, I lie. There was another. The one mentioned in the last post who will now be known as T.I.L.M.

He is a piece of work folks.

I did for about a minute feel really out of place and wonder why in the hell I was in that room. I felt that I had no right to be there. I had to very quickly snap myself out of that mindset. It’s probably what many actors of color go through sitting in those rooms where one of the things is not like the other. I can’t help thinking how amazing the power in solidarity would be. To walk into a room where there were a slew of actors of color auditioning for a show in which there were none.

As a heads up – there won’t be other posts this week because a) I am swamped and b) I hit 5 auditions this week so I’ve met the goal for the week of at least one a day per business day.