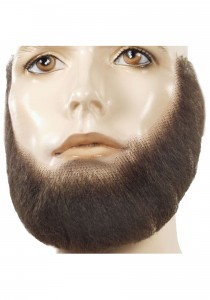 I know I said I wouldn’t include agent-driven auditions in this initiative, but there’s always an exception isn’t there.

So I had one of those agent-driven auditions for a show happening on the other coast that has a production running in NYC right now.

And for those wondering why I never give out names and specifics – I may be all about raising awareness and exposure, but not at the risk of destroying my career. Human pettiness being what it is, I prefer to play it safe.  Besides, this is not about attacking people/agencies.

I have avoided seeing the NYC production because I had gone in for it, along with A LOT of my other ethnic cohorts.  And at the end of the day NONE of us got cast. I mean: None. But I decided to do some research just for the visuals and stumbled on the NYC production photos and was naively taken aback.

They had, for the most part, Caucasian actors with fake beards that obviously were not carefully grown over months and years, trimmed to perfection and treated with the best Beard Czar supplements … oh, and brown face. BROWN. FACE.

Look, I get that it’s usually about talent. Usually. But I refuse to believe now, as I did then, that even without myself in the equation, that NONE of my cohorts were good enough to be cast. I know many of the ones that went in and some of them are SICK actors. So what happened?

And in this case, the casting director did his job by bringing in the appropriate actors. Could the director have been that flippant about the ethnic accuracy of the characters? And if so, why is that same flippancy not applied to traditionally white shows?

I guess Ben Nye and a damn good lace front is all you need to pass off anybody as an ethnic character. I mean it worked for Jonathan Pryce in Miss Saigon, right?

Oh wait – that didn’t go over so well.

Perhaps not ironically while I was in the waiting room I read a recent article about the white washing of Hollywood using The Hunger Games movie as a jump off.

Look, this is nothing new. Look at movies like Avatar (not the blue-skinned aliens one). Whitewashing source material for Hollywood production and general public ingestion is not new. It ain’t right, don’t get me wrong. We’re still stuck on those tried-and-true notions of light = good and dark = bad.

Unless it’s about Nazis in which case all bets are off.

To be honest I thought about the white washing (I call it white-out) while I read the novel. I somehow missed that Rue was black and Katniss being olive-skinned didn’t make me think she was anything but white. Halfway through the second book I thought: Where the hell are all the colored people??? And did only black people survive only to becomes Roots rejects? Good God – where are the Latinos?

My default is often whatever color the author is unless otherwise specific in the book. Not saying that’s right. And while this is different because the book is kinda clear about the races of the surviving people, reading the article just reinforced again why I am doing this 100in100 project and why this stuff really strikes a nerve with me.

It’s hard enough to compete with peers of the same ethnicity, but having to worry about everyone else now thanks to a fake beard and some brown make-up doesn’t instill much faith in me about chances and possibilities for actors of color. And it makes me wonder why then it’s not ok for white actors to be in black face playing black characters (Robert Downey, Jr. aside) or for the same to happen with Latino actors? But it’s ok with Middle Eastern and South Asian (look at Dominic Cooper in The Devil’s Double)?

And I am starting to think that just not giving a shit in an audition room is truly the key because it allows you to do your best work without the whispering voice.

Or as Jan Maxwell said she thinks when she walks into the room: You can’t have Jan Maxwell.

Although in my case, I should have subbed in my name instead of using that phrase verbatim.