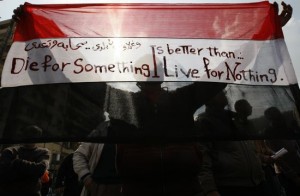 I can think of no better catalyst to return me to blogging after more than a year of being gone.

And so this is how the world awakes – or at the very least should. I will freely admit that I did not follow the people’s revolution in Egypt with the same hearty and rapt attention as others. After a while, you get used to hearing about these revolutions starting and whimpering out in no time once the government reinforces its iron will on the people. But some time after the third day I started to realize there was going to be no silencing of the masses. Problems in Egypt are frankly as old as oft-cliched time, but the modern socio-political issues have always been a curious thing. These are people who have been oppressed for nigh on 50 years (some would argue less, others more) due to one dictator followed by another. The shouts for freedom and equality are not something born out of Tahrir – they have been around for a while. The digital age and social media revolution only helped bring the issues to the forefront of people’s minds when combined with the physical real power of people in the streets. You can only go so far asking for change in a tweet or a FB post, but when you back it up with images of people from a wide strata of age and class – aha – then it becomes a lethal force for change. I admire what the Egyptian people did – their resolve, their passion, their anger. I doubt any community in the U.S. could last as long as they did marching all day and night in the streets and gathering more and more forces (granted America is the larger land mass – still…).

What fascinated and angered me was the response on this side of the ocean to the revolution – not the positive, supportive ones, but the shock and awe kind born out of, no doubt, a realization that countries in the Middle East don’t need help to get things set in motion. The fact of the matter is that you can espouse democracy and throw it around like the hottest buzz word but if you can’t even make it work in your own country and subsequently two other Middle Eastern countries, then you pretty much have no right to be using any other country as a guinea pig. Yes, political backing and support of less-than-ideal regimes in the interest of upholding national security and gaining footholds is nothing new (lest we forget the still ongoing denial of the Armenian Genocide), but it surprises me that it is still used as an excuse by a country that is supposed to be a superpower. We are, sad say to say, nothing more than post-modern colonialist thugs trying to plant flags wherever we see fit (Why one empire can’t seem to learn from the previous one’s mistakes is beyond me – it clearly hasn’t worked for the last 4 major ones, so why would it now).

So, yes, Brownies CAN be civilized. Modern societies practice this ridiculous form of ethnocentrism based on technology. I mean, clearly if your people are not walking around with iPods then you are backwater slugs. Lest we forget that we owe the Middle East much in terms of math, science, medicine, and art (though I will say I find it odd that with all the contributions made that they have not been able to match the empires in modernization and teched out living). They are not a bunch of Bedouins living out in the desert and riding camels. Nothing wrong with a simple life, I say. It don’t make you simple. So I really do think that the Egyptian Revolution is going to open that door into changing public awareness and opinion, and as that infectious spirit spreads to neighboring Arab countries and, hopefully, around the world, I hope the door gets blasted off its hinges. We have been mired far too long in the belief that anyone with olive skin and a five-o-clock-shadow is given to fits of religious extremism and anti-American sentiment. We sit much too comfortably in believing “they” are limited to driving cabs, running delis, or preparing your Halal cart food or looking for yeti coolers for sale. I am proud of all the Arab and Middle Eastern (yes, there is a difference) people I have known, know, and will come to know, INCLUDING those who may just enjoy being out in the desert with their goats. You can’t be a melting pot when you process all the foods into one ingredient. I like my fondue with multiple cheeses.

And, yeah, we got a long way to go from a tiny crack in the door, but when you see any possibility of light then that’s it mate. I can only hope that that same light is spread to as many Americans as possible to show them not only the error of their ethnocentric ways, but also to make them realize that they too can get in the streets, and raise their voices, and demand change. It happens in more places than online. It happens for longer than an angry dinner conversation where we compete to see who is smartest. And it certainly is more powerful than a bunch near-death old white men sitting in wooded chambers deciding how OUR lives should be lived.

I say infect me with this revolution and let true changes begin.