My roommate, still job hunting two months into our move, was finally blessed with an interview and spent most of the day preening and polishing.  However, after two hours of ablutions he realized that he was incorrect about the interview time.  It was now 2:30, his appointment was at 4.  We live on 147th and the interview was on Wall Street.  He had 30 minutes to get down and catch the train, no doubt on another erratic train schedule (they never run on time when you have to get somewhere quickly).  Running around in his boxers and white undershirt, water flinging of his still-wet head as he rounded the corners, he screamed for me to help him iron his clothes which sat in a wrinkled heap on his bedroom floor.

When a hirsute gay black man with all the flair of a gaggle of drag queens and suburbanite housewives shrieks a demand, you do the bidding.

The problem is that we only have one ironing board and his suggestion to use the floor bought out a barrage of horrified WASP-y remarks from me about ruining the cheap varnish which had already begun to blister and crack throughout the apartment.  I opted to use the other end of the ironing board (we did, for some reason, have two irons).  There we were:  a Negro and an Armenian sharing ironing duties, divided only by a lone can of spray starch.  I felt the urge to sing a spiritual or don a sweaty handkerchief.

“God.  Can you please turn on a light in here?  I feel like we are in some Asian sweatshop being made to suffer for our newfound independence.”

And that was our undoing.  As soon as the light switch flipped to on, everything died.  It was now 2:45 and the post-shower dew was being replaced by nervous beads of sweat on his forehead.

Not a problem, I thought, flip the appropriate circuit breaker and we are back in business.  But we were in for a slight surprise as we opened the circuit box inappropriately located at the top of a wall opposite the front door just out of arm’s reach.  What we faced were not the traditional black switches that could be pushed up and down or left and right thereby resetting the flow of power to our dead outlets.  There, in two columns of four, were colored circles with tiny little windows in the middle of each.  We looked at each other confused.  What fresh New York hell was this? 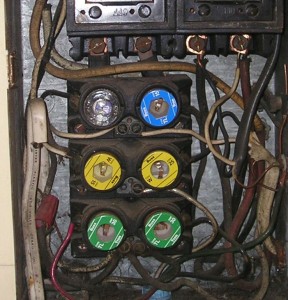 Turns out, our pre-war apartment was still saddled with the pre-war fuse box which used screw-in fuses.  They screw in like light bulbs and have metal threads on the bottom. When a fuse blows an internal metal strip breaks; this break can be seen through the wee peeping tom window.  But, we knew none of this at the time.

So these different colored knobs with various amp markings meant nothing to us.  And what the hell did “Slow-Blow” mean?  I just kept picturing embarrassed men post 5-second lovemaking.  We gathered that one of the fuses had blown, but not knowing how to check for it lead to a game of mix-and-match.  We were not even sure how many fuses had blown.  We had lost power in both bedrooms, in the bathroom, and to the kitchen fridge.  What kind of Frankenstein-ish circuit were these four things connected to?

We proceeded to unscrew each fuse, praying there was not a predestined way to do so without being electrocuted.  The last one proved to be difficult as it would not budge.  Neither of us wanted to turn too violently lest the fuse crack and spew forth a barrage of sparks.  I ushered my roommate to move the iron board to the living room to finish up while I manned the box, completely unsure of what to do next.

I braved a set of pliers and managed to wrest the little red bugger free only to realize that I had also managed to pull out the screw base.  I whispered a novena, or at least my interpretation of one, and took the base off.  I was about an inch away from the box before I realized that screwing the metal base back into a live circuit was probably not in my best interest.  I was working against time and necessity.

I went for it, plying it back into place and playing switcheroo with the remaining red, blue and white fuses.  Nothing worked.  Nothing was flipping on.  A call to the super was useless as he was an hour away doing everything except working on problems in the building, like, oh, say, my possessed radiator.  At one point I screwed in a fuse so tight I heard a sharp crack and yanked my hand away, jumping back a little with my eyes wrenched shut.  I slowly opened my eyes and ungritted my teeth.  I walked back to the wall and funereally closed the door on the box.

My roommate is out the door, sans resume, which is sitting in the dead computer, and I pace the house.  When the super finally does arrive, half an hour later than expected, I am put to shame as he switches out the fuse in one guess and brings life back to our hideous wired progenies under 10 seconds.  He shows me the blue fuse with the broken metal strip and utters something in a form of broken English I have yet to decipher.  But I can tell from the “You bothered me for this shit?” tone in his voice that I am going to be yet another dinner table anecdote of the clueless neophyte in 5A.  I smile.  Usher him out, reminding him about the radiator, and sheepishly walk back to my room where I type.  I type in shame.