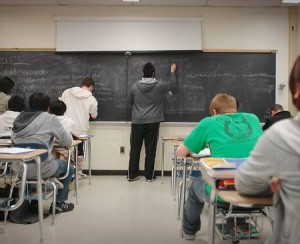 I guess it was only a matter of time before I weighed in on this issue. The whole LIFO policy (Last In First Out) is as mundane and unnecessary as tenuring in universities. I’ve taught at community colleges, universities, private universities, and even high schools and I can tell you that in all those circumstances, 90% of the time the teachers that need to get the fuck out are the old war horses still trudging along using up valuable oxygen. That may seem harsh, but if the purpose of educating is to, well, EDUCATE, and to keep up with current methodologies and pedagogy WHILE going with the modern flow of society (because don’t kid yourself, teaching is as much about knowledge you can impart as it is about how well you can connect with your students) then the majority of the teachers who were first in need to be first out.  Just that simple.

I don’t believe in seniority or tenure because it encourages laziness. Post-secondary professors feel almost invincible because they basically can’t be fired for much. I understand the reasoning behind it but I don’t think it’s necessary anymore. Believe me, many of my undergrad and grad profs, though they were fun people, should not have been teaching anymore. Except for my religious studies professor who has an ancient elfin man who, it was rumored, wrote gay novels. I believe this to be true only because he never stopped talking about the young men he met while teaching in Morocco – and only to me in our office hour meetings. But the rest were still teaching from yellowed notes and outdated research. They have just fallen into this repetitive cycle. They refused to keep up with the times. My first semester in grad school was also my first time teaching a college class and my mentor raked me over the coals for breaking the class into small groups at one point in the session because it encouraged “social butterflyism and no real work being done), when in fact, if done properly, leads to great dialogue and knowledge sharing. Another told me to stop being funny because it wasn’t my job to entertain them. What is teaching if not performance?

I think seniority works ONLY if you have a pool of teachers all operating at the same level with near close “marks” (however you define that). Length of time should not dictate your employment stability. I get annoyed that I am pushed down the class allotment ladder every semester when I know I am a better professor than many of my peers who have NO idea how to connect and educated (at least in the current environ I teach in). All this being said, I do understand that for many educators, especially pre-post-secondary, have their hands tied with bullshit state-run claptraps such as the standardized test which is used to not only given teacher bonuses but to determine funding for schools. Those tests are pathetic – I know because I had to “teach-to-test” when I had my brief high school stint. I was told to abandon the curriculum and focus on preparing them to pass the test. So it became a process of force feeding information which became useless after the test. And by the end of the semester they had learned nothing. Ironically, I agree with these kinds of tests as the exist in the U.K. because the process and parameters are different.

If students and parents love a teacher and think they are strong educators then why resort to a policy that gets rid of them in favor of some embittered one who occasionally pops in a video to quell the angry teenage masses? How can we say we value education so much in this country when we clearly have a history of abusing it, i.e., No Child Left Behind? And how can we claim to have the best practices and processes when other “lesser” countries are clearly beating us to a pulp when it comes to academic standards and performance? Is NO ONE paying attention here?

By the way, this woman is a waste of space. And does anyone else think she looks like the bastard love child of Voldemort and Dolores Umbridge. I mean seriously. Someone fire this woman. 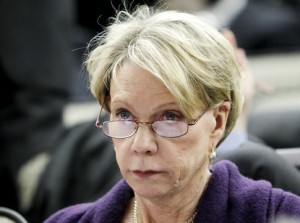