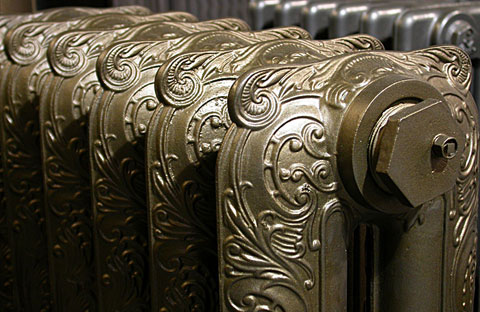 Natives of this concrete-washed paradise will often warn newcomers about the crime, the subway schedules, and the pervading smell of summer urine.  But the one thing that gets conveniently left out is a wintry harbinger of aural pollution.  The radiator.  I had the unfortunate luck of moving to the city in the dead of winter.  I rationalized that it would be safer because what criminal would want to rob a moving truck while a zero degree wind chill careened down the avenue.  So my torrid affair with the radiator began on my very first night in the city.

Growing up, I was spoiled by central heat and air.  The joys of moving a little lever left or right to adjust the temperature was now replaced by a metal container that mocked me with drips and hisses.  My experience with a radiator was limited to a standing pipe that ran the length of a wall at a friend’s apartment – she had kindly offered me her extra bed while I hunted for a place of my own. Until that point the only thing I knew about radiators was stored in the back of my head as the scene in Beaches where Bette Midler and Barbara Hershey are bundled up singing Christmas carols as they wait for the heat to be turned on in response to the gentle prodding of Midler slamming a frying pan against the radiator.

Radiators are part of the inescapable charm of NY living.  Unless you are willing, let alone able, to spend six to seven figures, chances are great that the little lever will be M.I.A.    So it is no surprise that I came to share a living space with two floor radiators and three standing pipes – the former split among the two bedrooms and the latter placed in the living room, the bathroom, and the kitchen.

The standing pipes proved to be no annoyance at all.  They did not pop and hiss, but they did present other hurdles.  The living room pipe was a decorating road block as nothing could be placed directly against it for obvious flammable reasons.  But that also eliminated all seating possibilities unless you wanted to suffer burns from the accidental straying of an arm or leg draped over the couch.

The bathroom pipe jutted up against the outside back of the bathtub, and as I quickly learned the first night, a vinyl shower curtain does not make a good partner.  This meant making sure there was at least a half foot of space between the pipe and the curtain at all times.  It did, however, keep the towels nice and warm.

The kitchen pipe was positively useless as it never worked.  This was a minor annoyance until the one night it did kick in while I was preparing dinner using three burners.  Even in the dead of winter, with the windows wide open, I felt like the roasting chicken in the oven and I had much in common.  I have found that I do not mind that pipe being dead.

The radiators, however, were the albatrosses.  My complete ignorance shined through during the first week when I could not figure out how to operate it.  The single valve seemed easy enough – right to close, left to open.  But right to close only led to a condition known as “water hammer” wherein the radiator becomes possessed and violently shakes in harmony with a noise akin to a sledgehammer meeting the pipes in a passionate kiss.  I was afraid for my life envisioning the pipes bursting through the wooden floor or the radiator exploding, spraying shrapnel in every direction, as I slept.  Turning left sometimes produced the same results as all the held back pressure was released in one cacophonous rush.  I would have to patiently wait until the noise subsided only to be introduced to the rattling of the valve which needed to be jiggled to soothe it.

By the second night I took to wearing ear plugs to drown out the noise as it would sometimes begin its John Cage-esque symphony in the middle of the night.  But the noise was not the only problem.  The heat generated by radiators is immense.  I guess I should have taken it as a bad sign that the floorboards underneath and around the radiator were considerably darker than the rest of the floor.  The scorch marks should have warned me not to get near the behemoth, but every once in a while I would foolishly attempt to turn right, knowing full well it would not work, only to be met with a burned hand (because the valve was also cast iron it was not spared from the heating process).

There was no way to avoid the heat, so I slept with my bedroom window wide open.  I didn’t care that the fire escape was just outside leaving me prone to being attacked and raped by an intruder.  At least I would stay cool.  In fact, most of the windows in the apartment remained open throughout the day allowing cross-ventilation to normalize the stifling temperature.  This does present a slight problem when rain or snow partner with wind.  One morning I woke up to find my curtains had been sucked out of the window and soaked halfway up.  The radiator dried them to a starched crispness in 10 minutes.

It took a month before a friendly neighbor, in mocking shock, told me that radiators, no matter the type, should shut off when you turn right.  I consider myself rather well-educated and refused to be bested by a century-and-a-half’s old invention.  Research showed me that there are two basic kinds of old-school NY radiators:  hot water and steam.  Hot-water radiators are made of cast-iron with two pipes that come out of the floor into the base.  One allows hot water which rises to the top via a pressure pump.  As it cools on the way down it is forced through the second pipe.  Steam radiators use, not surprisingly, steam which requires no mechanism to push it along as it operates under its own volatile pressure.  It is this second variety that most often leads to the hissing release of pressure via a blowhole on one end as well as the orchestra bangs as the steam looks for release like a horny pre-pubescent in the back of his parent’s car.

We were blessed with the second variety.

It was not until a raging leak from my roommate’s radiator solidly proved my neighbor’s tip.  His radiator received a new valve with a rubber dial and copper pipe joint.  He was rescued from hissing, water torture, and steamy dehydration.  I was jealous.  I concocted a flimsy lie that would easily pass by our super who had marginal control over the English language.  I claimed that the clanking noise bothered our downstairs neighbor and that I had been burned repeatedly by the valve.  Help did not arrive until four days after the increasingly frantic calls when the super came to my rescue.  But his laziness, the birthright of any New York super, reigned supreme.  I was not gifted with a copper joint and a heat-proof valve.  I was left with only a rubber valve which did nothing to cease the ebb and flow of steam into the pipes.  In fact, the heat managed to weaken and make it so pliable that “turn right to close” became “turn right and can’t stop.” It just spun around the screw in its weakened condition.  I could swear the radiator was laughing at me.

Despite its “charm,” it is also an eyesore regardless of the rather pitiful silver painted disguise the radiator wears.  It seems pointless to try and gussy up something so aesthetically flat with something as absurd as silver spray paint (although there is a company that designs contemporary and designer radiators).  The slip cover disintegrates after a month of direct heat as the paint begins to chip off.  Like the trunk of a freshly cut tree you can guess the age by the many layers of paint that are revealed.

There is an odd pride that swells in your chest when you realize that the radiator you have been saddled with is the same one installed when the building was a newborn.  You feel like you own a piece of history that you can show off to your friends and relatives.  Forget about Kandinsky and Pollock, search for an original SanGalli and put an art lamp above it.  Regale your peers with stories of old New York replete with images of tenement immigrants huddling around the very same radiator that is in your bedroom.

I would trade all of that to get one good night’s sleep without ear plugs or the threat of death from an open window.  I would call the super back, but I am sure I would only get a new screw this time.  Besides, I feel belittled when I register my out-of-town neophyte complaints and he just looks at me like I am insane.  It is the same look he gave me when I called him the second day after I moved in to let him know the heating elements were missing from the oven.  Those in the know are guffawing, those unaware should know that stoves are gas-operated in New York; this includes the oven which requires no coils.

How the hell was I supposed to know?  I can imagine being the gringo anecdote of the evening shared over a plate of puerco asado y arroz amarillo.

So I am consigned to the unhappy lot of sleepless winter nights as I bed with my ear plugs, the comforter over my head, and a spare pillow pinioned on top.  My roommate found me like that one morning and thought I was dead when I would not respond to his “Wake up!”  That is the consequence you pay when you move to a pre-war building in a city like New York.

There is a poetic charm about something as trivially important as a radiator.  After a while you start to learn its habits and predict its moods like a long-time lover.  You recognize the difference between danger and warmth.  Appreciate it when you are so cold your testicles have become ovaries, and chuckle at every “coo” and “goo” it spits out when you’re near.  In a psychologically unsound way, it becomes a member of the family.  The relative that just won’t leave.

Even as I sit here writing this, I am humming along to the diatonic scales played out by the silver water hammer with a syncopated hissing counterpoint.  I may not be able to tune it out, but I will sing a duet and wait for spring to be fully sprung. For more info please visit : http://www.lovecustomwaterbottles.com