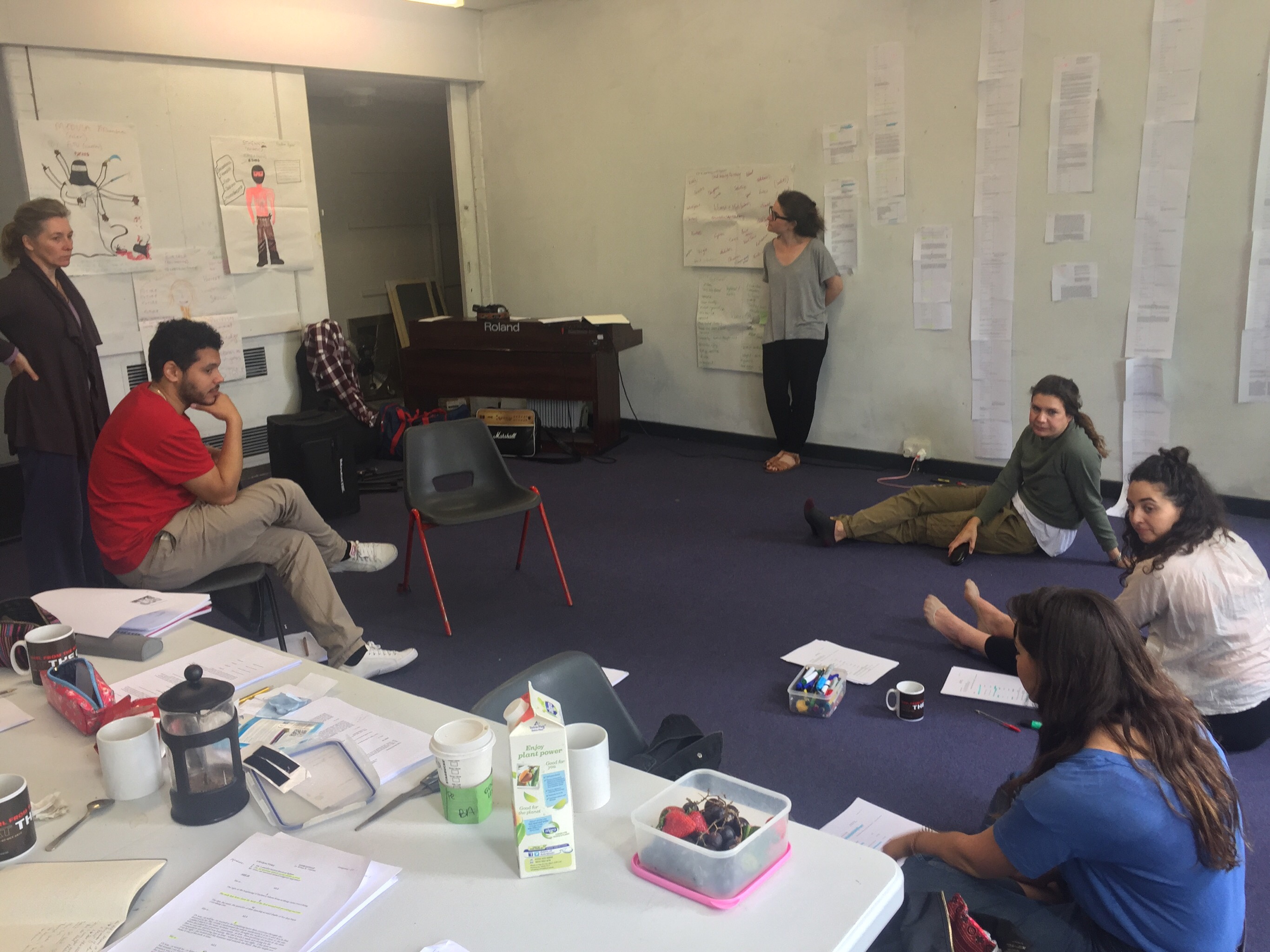 Three weeks has flown by and now I’m back in the Old Vic Workrooms for the second and final week of working on my new piece Gorgonae. We built in time for me to generate pages from the end of our first week. Which always means procrastination time where I ‘think’ about the play before I start writing. I work best under pressure. Always have. I can’t belabour the writing process. But I am finding that I do need the time to imagine scenes and play them out in my head so I can get a sense of what it is I am writing.

And at this point anything would have been better than the pages I delivered on the last day. You could say they were pages and they had words on it…but that’s about it. Although they were a good starting place for – well – anything.

And then off we went on a break and I turned my attention to something else for a few days to clean out my brain a little. And then back to looking at the script.

Staring at the pages more like it. But at least I had a synopsis to work from.

A few days before our return to the rooms I feverishly generated the scenes that I thought would work for our sharing and help flesh out the story for everyone. And then it was Monday morning. I find I don’t really get nervous on first reads anymore. My reaction always tends to be the same: God that’s shit writing. It’s just the process of hearing it only in my head for so long and then hearing it from the mouths of actors who may or may not say the words as I heard them in my head. It’s an illogical psychological thing. I usually ignore it.

It’s reactions after that are telling. These were telling. Not in a good or bad way. But I can tell, generally, when a scene works or when it doesn’t. I’m also an actor; I know the tells. And then we let the actors go before lunch to sit and discuss the dramaturgical arc of the scenes but also to look at the shape of the piece and how the different elements are being used. Trying to make sense of the seemingly disparate worlds of sound, music, movement, and text to make sure a clear story is being told.

So Carla, Kareem (our musician) and myself banged our heads against walls and one another trying to make sense of what it is I was doing, what I wanted to do, and the BS I started spouting to try and make sense of it.

Not gonna lie – it’s frustrating as hell. It’s meant to be. Otherwise everyone would do it. But figure it out we did. Along with what scenes we wanted to work on with the sharing.

And off I went to write.

But not so quickly as I had to co-chair a panel on storytelling diversity that ended around 9.15. I didn’t get home until 10.30. I scarfed down some food super quickly (and starting a Whole30 programme right now was stoopid) and go to rewriting four out of the five scenes. Thankfully (thanks to the muses) I write quickly. Very quickly. It’s better that way because I don’t have time to think and judge. I just react. And react I did. And finally dropped off at 1.20ish in the morning after treating myself to some ASMR videos which I have discovered are one of the only few things that can quiet my hyperactive brain so I can go to sleep without much fuss.

And I feel better about the new scenes. Now….what will the tells tell 🙂

For the Sake of Intriguing Opportunities