I know that journalistic standards are based on the old credo “If it bleeds, it leads.” It’s something I learned when I was in college as a journalism minor, and something that was pounded into my head for the two short years I worked as a journalist. I get it, I do. I don’t like it, but I get it. I also get that in this media-overload age you need to find a way to gain readership, especially online where your profits are driven my advertising and click-through. I get it, I do. But I don’t like it. The fact that amateur bloggers and armchair critics can spread breaking news via Facebook and Twitter sooner than major news outlets with thousands upon thousands of more dollars in resources is interesting, intriguing and humorous. If an event or topic is no longer “sexy” or “bleeding” then there is no reason to keep it relegated to anything other than a sidebar. We are in a SoundByte era ball-gagged with commodity fetishism. So I guess it is not altogether surprising that the current front page of CNN.com is this: 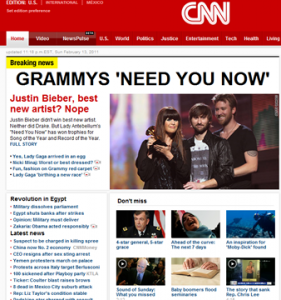 At least Egypt is the first item in the sidebar. AND it’s bolded. Now I would expect better of CNN. Even MSNBC has the same kind of frontpage, but they have a picture of Egypt in the sidebar. Not surprisingly this is not the case across the world as evidence by one of the better, if not the best and most unbiased news source, BBCNews.com: 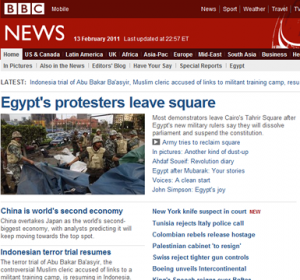 I hear your argument: But the Grammys are a big deal in America. It is not a British or other foreign soil event. Well, now, I don’t see why that should matter. Why can’t our news outlets be more like foreign presses? Is it come kind of assumed pandering for American readers? Do they not think we can handle real news-all news-unopinionated news all the time? Or is this truly what we like and what we want all the time? Look, news is news and it IS subjective as to what is important from one person to the next. But global changing events, those that have the power to re-shape the world, a country, a people should always be more important than anything else. Shouldn’t it? Am I too naive to think that? But WAIT – there is another twist. See this? 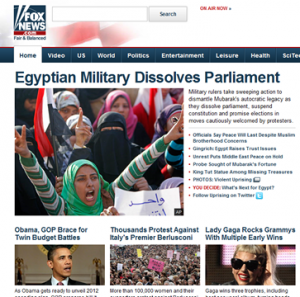 FOX NEWS, which you would NEVER think as siding with anything that is not American through-and-through actually still cares about Egypt and a people they usually get wrong and demonize. I was floored. FLOORED. I guess American news has always been this strange hybrid of sensationalism and facts bordering on tabloids whereas in other places, such as the UK, there is one channel for tabloid-esque news and one for straight up news. At least we have people around the world who turn their cameras around and capture events, people, and voices in real-time as they happen and as they are meant to be without editing and airbrushing. For all the crap that Facebook, Twitter, and YouTube gets sometimes (some of which I agree with) they are putting news back into the realm of being just that: The News.

A Silk Road to New Beginnings