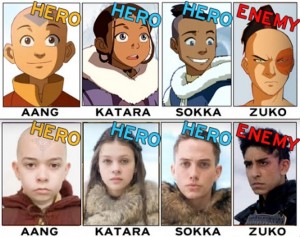 The very first thing I did when I came to New York City four years ago to become a professional actor was change my name. I didn’t want people to peg me as a certain ethnicity because I was afraid of being seen as only a “terrorist” actor. And having been spoiled with the opportunity to play some very choice roles in Florida, I couldn’t see myself taking a step back. Within the first 6 months I learned two things:

I also learned that there was such a thing as an Arab-American/Middle Eastern Acting community. Something VERY foreign to me as I had been (self)identifying with Caucasian communities for the first 16 years I lived in the U.S. To be able to rediscover my ethnic identity and to be able to share it with people of the same ilk – to be able to talk in the same language others found abrasive and eat the same foods others found”gross” – was so liberating and joyous.

But the more I became entrenched in the community and in the acting business I realized just how difficult it is to have a career and/or to “make it” as an ethnic actor (anything other than black of Latino – not that they don’t have their own share of casting problems, but as a whole they have jumped over the hurdle my community faces).

In the first two years I was met with the confused stares of casting directors when I would show up to musical and play auditions that were looking for “any race.” Invariably, I was always asked where I was from (which I learned to ignore and say “Florida” which was true). On one occasion, I was told, “I’m not sure what we would do with you.” And on another I was less than overjoyed to overhear, “God, it’s like Slumdog Millionaire out there.”

You know, it’s not my problem if you don’t know “what to do” with me just because I am an actor of color. How about judging me based on my talent and ability to take direction?

I know many of the casting directors in NYC. Some of them I am really friendly with. Some of them I would sooner set on fire. But regardless of how I feel about them, I often wonder what they think about the situation. I have known a small handful who have consistently called me in for roles that were CLEARLY described as Caucasian – and on some occasions I have booked those roles and have been so thankful for the opportunity and for the open-mindedness of the casting director to take a chance. But for the rest, it’s just so much easier to cast white and create a whiteout in the roster.

And the answer is simple really. It’s more than a lack of imagination – it’s the assumption that audiences feel more comfortable and can identify and connect better with Caucasian actors because the majority of entertainment consumers are white living in a majority white country. So who do we blame? Audiences or the folks behind the creative tables?

There are so few meaningful characters of color that aren’t reduced down to the basest stereotype, and I get that that stems from a social agenda and undercurrent of anti-Arab (or what have you) sentiment. And I know this is just the first step in progressing and creating more acceptance of our images so that we CAN play the more progressive roles. After all, it wasn’t that long ago that black actors only played slaves and housemaids (and God forbid if one of THOSE movies gets made nowadays). Latinos no longer just play gang members and drug runners (though there are more than enough of those roles). And, yes, I have even seem some Middle Eastern roles that had some meat and depth to them.

But invariably those roles are all deeply connected to their ethnicity. As if you couldn’t play a Middle Eastern without the character dealing with some issue of that ethnicity. Why not an Iranian architect who is just that an nothing more? An architect who happens to be Iranian and not running from the Shah or connected to Ahmadinejad.

And, by the way, the same holds true for theatre which is supposed to be the last bastion of openness and exploration and frontier-breaking. I swear, if I have to see another play that is there to create or assuage white guilt for some war or refugee I will barf on myself. We have so many more stories than that and are capable of playing more than those roles. My peers are some of the most amazing actors, but they rarely seem to be allowed to show that.

Even as a playwright, I have been told that I would be more easily produced and accepted if I changed roles to Caucasian or wrote mostly for Caucasian characters. The gall that audiences are only accepting of or receptive to those kinds of plays is gross. I get giving in to the sensationalism of a national emotion. Americans were angry post-9/11 so all the Middle Eastern characters were schemers and terrorists and people watched for a feeling of revenge they could not exert in real life. It’s morbid and unfair but psychologically logical. We’re not in those days. We shouldn’t be. And if we keep pushing those kinds of roles then the national consciousness is never going to change.

Why should we be afraid to write plays and movies about the Palestinian-Israeli conflict that is pro-Palestinian?

Why can’t we write about the Armenian Genocide?

Why can’t we write about a family living in Ireland who just happen to be Indian?

Recently, a new group popped up on Facebook that some friends of mine are involved in: AAPAC (Asian American Performers Action Committee). The frustration Asian American actors feel not being represented fairly on the stage is completely legitimate. How did we go from 2 decades worth of Asian-American characters in movies, TV, plays and musicals, to almost none? Is it because there is no longer the backdrop of war?  The “Japs” and the “Chinks” and the “Commies” are no longer the enemy so why bother putting them on the screen or on the stage to suffer for the enjoyment of the injured national identity, right?

And for those who think this is crap, take a moment to carefully read through the statistics below. They are accurate, shocking, sad, but unsurprising.

If any of this stuff interests you, you should check out the following:

46% of the roles played by actors of color were roles that did not specify race (non-traditionally cast).  Tthis number, however, was still only 9% of total roles available.  African Americans were far more likely than any other minority group to be cast in a role which did not specify race.  Breakdown by ethnicity as a proportion of all roles which were non-traditionally cast:

When looking at Broadway as a separate industry, the representation of Asian Americans dropped significantly to 1.5 %:

*includes new shows that opened on Broadway during this period (with the exception of “Soul of Shaolin”, a special event imported directly from China), subsequent replacement casts, and the seasons of the fourteen largest non-profit theatre companies. Does not include shows which opened on Broadway prior to this period but may still be running or Commercial Off Broadway shows.  Special Note: Ethnic classification was not self-identified though significant effort was made to research interviews and bios which might indicate ethnic self-identification. Asian American actors include those of East Asian, South Asian (India and Pakistan) and South East Asian origin.