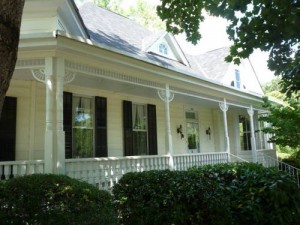 I am feeling inspired by an episode of MTV’s True Life that is playing in the background as I grade. It profiles a family in Louisiana – mostly the brood and their crazy antics. And, strange though this may be, I want to be a part of that family. To be a part of a Louisiana, or some other small Southern town, community.

But it’s true. I have always had a fascination with small Southern towns, New England towns, and UK shires (no, not the Tolkien kind…though those would be OK as well). I think it’s a quality of quaintness, simplicity, and a just-living-life-ethos that I love about them. I am well aware I would stick out like Kunta Kinte at a 1950s Klan rally. I am also well aware that I probably would not be taken to kindly as just one of the kinfolk. But I don’t care. I think we have been swallowed up by the light-speed pace of modernity that is heavily influenced by capitalism, commodities, and affluence. I think back to the “simple” life and wonder why it is so derided. In said show, a girlfriend pesters her beau to get a better job and how wonderful it would be if he got a job at Ace Hardware – and at first I guffawed.  Then I caught myself and realized: God, how amazing is that? That the apex of employment concern is a chain hardware store. It’s an honest living. It’s something to do to help you just live life free of any other societal pressures.

It’s the same thing for all three of them: These small communities where people know one another (and their business, I know), love their environment, their communities, and are concerned with paying bills, working, and enjoying life (and their neighbor’s business). And what is wrong with that? We often poke fun at these communities, considering them backwards and less fortunate, and I guess by modern societal standards that is true. But it’s also utter bullshit to think they are not living a good life or are living horrible lives compared to those of city folk with their iPhones and iPads.

I often think of just running off and finding a home in one of these communities and just worrying about living life and not trying to achieve the 101 goals and expectations to achieve a lifestyle reinforced in the media. Maybe I am deluding myself that it would be “easier” – each clearly has their own set of complications and roadblocks. But a simpler life is a thing of beauty.