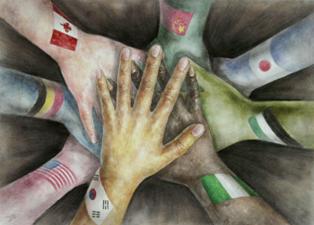 Mostly the European kind. I was a sports kid: basketball ( i had the best performance basketball shoes ), soccer, tennis, basketball, badminton.

And the Olympics, of course. A sports glutton’s wet dream.

American sports, I never understood. But that makes sense as I did not grow up in America. Never quite understood the obsession with American football and baseball (although I AM a massive MMA fan). And I seriously doubt any other country has the same kind of rabid and morbid obsession with sports. It brings out that biting sense of competition where we gain superiority by lording it over AstroTurf weaklings. We become violently overprotective about being the best in any kind of sport that exists in the world even if it is something as mundane as curling (though I will freely admit that I can never tear my eyes from the TV when this event is on).

HOWEVER…what I find interesting is a rampant ethnocentrism that still exists in American sports based on those good ol’ racist chestnuts  (and newsflash: we’re actually a more racist society today than any other time). As little as 10 years ago American sports were dominated by mostly white and black faces. Slowly but surely and inevitably we began to see more Latin faces. And then Asian faces crept in. This year I am astounded and ecstatic to see Arab and Persian faces. I live for those moments because they are an incredible signifier that the American identity truly is changing. BUT some, no, many people don’t like that. Especially not in their sports. The reality is, most Americans watch the Olympics and automatically put the athletes into enemy camps. The Russians tend to have this mutant stamina and endurance. We’re forever trying to outwit those crafty Chinese (or, really, any Asian since they all get lumped together). And will we EVER run faster than those damned Ethiopians and Somalians? So when we see those genetically enemy camp faces we get a wee riled. I’ve overheard and read conversations where people vehemently and honestly express their dissatisfaction at seeing non-American faces.  Well what might that be you ask? Who knows…I am gonna go with the traditional blond hair and blue eyes with the occasional brunette creeping in.  Essentially, a white-washed line-up in sports where there has been little ethnic diversity (figure skating, swimming, diving, and so on).

Now here’s the kicker: All these “foreigners” invading the sports club are still…wait for it…AMERICANS. Born and bred. So I’m not getting it. We still get this Melting Pot nonsense crammed down our throats (which is utter nonsense as we are FAR from that. I suggest a nice mixed salad – dressing on the side), but the truth is there are still divisions based on skin color and ethnic features. We’re a country built on immigrants yet somehow we’ve come to adopt and espouse to this generic appearance which is rather European. We’re the country that everyone comes to with their crap lives because we tell everyone that we are accepting of all. So what’s the big deal with changing it up in sports? Yeah, there are some anthropological genetic differences that make one race better suited to a sport than another (that may smack of racism but it doesn’t – it’s scientifically proven with African-American flat feet, Asian lean, short bodies, and so on).

Is it really that weird to expect that more and more sports are going to resemble a Pantone color wheel as we “progress” through the decades? I mean, come on! A Persian male figure skater and a Saudi Arabian female skater.  That’s amazing! It should be! At the end of the day are we instilling pride in a national sports team or in a racially homogeneous sports team? Much like everything else that is not electronic based, it will take time for us to update our brain softwares to make sense of these shifting and changing racial algorithms, but we’re only delaying the inevitable if we resist something so obvious and basic. I’m not particularly naive in thinking that racism will NEVER exist – that is one box not even Pandora could close if she wanted to. But at the end of the day, it’s a bunch of people in polyster, lycra or neoprene buying vats of Icy-Hot and kicking around balls, beating them with sticks, or contorting their bodies in ways they should never be.